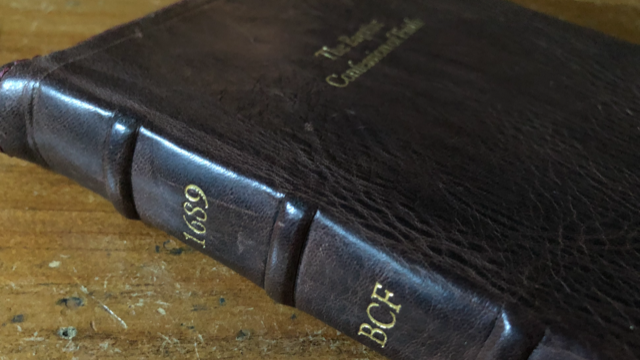 Christ Reformed Baptist Church (CRBC) is a confessional church. As such, we adhere to a written confession of faith that we believe to be a good and accurate summary of the Bible’s teaching. Our confessional standard is the 1689 Baptist Confession of Faith (BCF), which Baptist historian, W. J. McGlothlin, rightly described as “the most influential and important of all Baptist Confessions.” We believe this standard contains carefully worded summaries of the contents of sacred Scripture. Acceptance of every confessional distinctive is not required for membership at CRBC. One may be a participating member of CRBC by affirming the evangelical distinctive that salvation is accomplished by grace alone through faith alone because of Christ alone. Nevertheless, the officers of CRBC must adhere to the system of Reformed doctrine taught by the 1689 Baptist Confession of Faith standards. The confession adopts a theology that may be defined as catholic, evangelical, and reformed.

The Solas of the Protestant Reformation

The Marks of the Church

The Church consists of all those individuals whom God has saved throughout the world. The marks of the Church in her individual congregations are those defining characteristics of the body of Christ throughout history. These marks are especially…

Our polity is known as plural elder-led congregationalism, which simply means that we are:

We believe the Scriptures teach that Christ has given only two ordinances (or sacraments) to the Church: baptism and the Lord’s supper. The 1689 BCF (29.1-2) states,

Baptism is an ordinance of the New Testament, ordained by Jesus Christ. To those baptized it is a sign of their fellowship with him in his death and resurrection, of their being grafted into him,1 of remission of sins,2 and of submitting themselves to God through Jesus Christ to live and walk in newness of life.3 Those who personally profess repentance toward God and faith in and obedience to our Lord Jesus Christ are the only proper subjects of this ordinance.4

While baptism is a sign of entrance into the visible church, the Lord’s Supper is a rite of fellowship. Bread and wine represent the body and blood of Jesus. Worthy receivers of this meal are those who profess faith in Jesus Christ (1 Cor. 11:26-30). By faith in Christ alone, believers spiritually feed on Christ, show forth His death, and receive nourishment as they partake of the elements (John 6:35, 53; 1 Cor. 11:26). The 1689 BCF (30.1, 7) states,

1 It is given for the confirmation of the faith of believers in all the benefits of Christ’s death, their spiritual nourishment and growth in him, and their further engagement in and to all the duties they owe him. The supper is to be a bond and pledge of their communion with Christ and each other.2

Worthy recipients who outwardly partake of the visible elements in this ordinance also by faith inwardly receive and feed on Christ crucified and all the benefits of his death. They do so really and truly, yet not physically and bodily but spiritually. The body and blood of Christ are not present bodily or physically in the ordinance but spiritually to the faith of believers, just as the elements themselves are present to their outward senses.1